Imagine this - you’re out of the office, but want to access your company’s enterprise application in order to register a new client to the system. You have to write the information on paper, then come back into the office to register that new client into the system. Wait a moment. Why am I still unable to access our workplace IT enterprise system, when I can access pretty much everything else on my smartphone? This is a modern problem.

Worldwide internet usage has been increasing ever since its inception, but the hottest trend is what lies in most peoples’ pockets. Mobile usage has grown to new levels and is increasing at faster rates than desktop usage. This is due to more advanced mobile hardware, software development toolkits and functional languages leading to exciting new technologies at the palm of your hand. 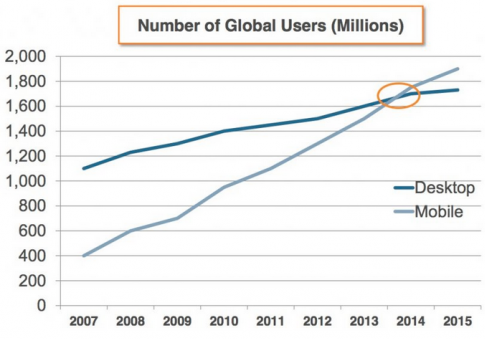 
Users expect ever more efficient and capable applications. This has presented a number of challenges, namely the increasing employee demand for mobile access to enterprise applications. It is expected that by 2017, demand for enterprise app development will outstrip supply by five times. Nowadays, it is expected that every web application a developer creates, must also be available on every device, including mobile. But this means enterprise developers need to create native mobile apps, an app that has been developed for a specific device or platform.

Businesses face two common problems with native development: the need for fast development and a lack of mobile development skills in the markets. Also, most businesses are incapable of developing their own native applications. Enter the Hybrid application – the combination of mobile web apps and native apps.

This major trend is seeing mobile development in hybrid applications begin to dominate traditional native mobile apps. Native apps are expensive to produce and are often time-consuming, while hybrid applications are a more efficient alternative. The majority of the hybrid app code can be reused in web app development. These hybrid downloadable apps are written in HTML, CSS and Javascript while wrapped in a framework, such as PhoneGap or Cordova.

There are currently three factors that are fuelling this trend:

Moving into 2017, we will see a further increase in Hybrid enterprise application demand. In relation to job markets, we should see more software engineering positions open up as a result of businesses switching to hybrid enterprise applications. Due to these applications running on HTML, CSS & Javascript, it is reasonable to assume that software professionals possessing strong experience with this skillset, will be hot candidates throughout next year. Consequently, businesses will be looking to hire strong software integration professionals in order to facilitate the move to hybrid apps.